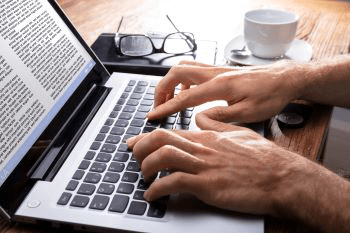 By and large, early-career authors follow this rule of thumb: Active voice is good. Passive voice is bad. However, that black-and-white statement is, in fact, an overgeneralization that should be taken with a grain of salt. While active voice is the preferential choice more often than not, passive voice does serve a purpose in select situations.

Today, we’ll discuss how to differentiate between active and passive voice, as well as when it’s quite alright to compose passive sentences.

Here are some additional examples:

“Somebody stole my laptop.” (Ginger)

“The student wrote the essay.” (CWI)

Passive sentences, on the other hand, flip this script, featuring a subject as the recipient of an action. In other words, the action and object are placed before the subject when writing in passive voice.

Let’s revisit our friend Billy, who committed to cleaning the living room on Sundays; but now, instead of Billy being our sentence’s focus, the living room–in passive voice–takes center stage. How might this look on paper? Refer to our comparison below.

“Billy will clean the living room every Sunday."

“The living room will be cleaned by Billy every Sunday.”

Here’s how our additional examples of active voice–seen above–would be structured in passive voice:

“The savannah is roamed by beautiful giraffes.”

“My laptop was stolen.”

“The essay was written by the student.”

When to Use Passive Voice

So, why do writers share such a collective disdain toward passive voice? As the University of Wisconsin’s Writing Center puts it, “Passive voice sentences often use more words, can be vague, and can lead to a tangle of prepositional phrases.” In short, these sentences tend to be really clunky.

“The novel was read by Mom in one day,” for example, is less direct than saying “Mom read the novel in one day.” This message, in an active voice, remains clear throughout. Who is it? Mom. What is she doing? Reading. What is she reading? A novel, in one day’s time. See, that’s a clear-cut sentence. “The novel was read by Mom in one day,” however, doesn’t answer our initial question of ‘who?’ until we pass the sentence’s midway point. By structuring sentences this way, the author might confuse their readers. The last thing a writer wants to do is break the reader’s emersion by forcing them to stop, reread a sentence – maybe even an entire passage, paragraph, or page – and figure out for themselves what events have just transpired. And, as it turns out, in many cases, passive sentences can elicit such a response.

Should we never use passive voice, then? No, hold on, that’s not the case. Passive voice shouldn’t be sworn off altogether, but rather used sparingly, when appropriate.

Here are a few situations in which passive voice is preferred:

Are you interested in improving your own manuscript? Then we’d recommend running it by a professional copy editor.

Professional editing services – like English language copy editing, offered by eContent Pro International® – can help authors increase the quality and integrity of their work. Editing services will make sure your use of voice, whether active or passive, is up to snuff, while simultaneously addressing issues with spelling, punctuation, grammar, terminology, jargon, semantics, syntax, consistency, flow, and more.