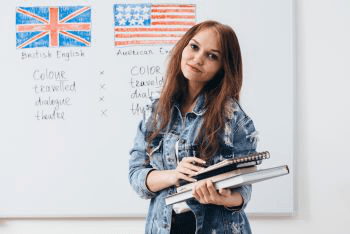 The birth of the United States of America created a demand for a national language. In 1807, when the nation was just over 30 years old, political writer, editor, and author, Noah Webster, charged himself with the task. According to the New York Public Library, in the next 26 years he wrote and published a fully comprehensive dictionary which he called An American Dictionary of the English Language. With this text, he hoped to accomplish a few goals: standardize American speech, publish American words which had not yet appeared in dictionaries, and reform the spelling of existing words.

Today, authors trying to publish their manuscript in an international journal can relate to the difficulties that may arise with the reformed spelling of existing words in American and British English. The minor differences in spelling, grammar, and vocabulary in American and British English can make your text incorrect depending on what style of English the journal requires. It can be tricky to navigate a peer edit when you aren’t sure why, for instance, an American encyclopedia is a British encyclopaedia. Luckily, eContent Pro International® has a few tips for authors struggling with the difference.

Arguably the biggest change that Webster made came with words that end in -our. While British English kept the u, American English dropped it. Therefore, honour became honor, and labour became labor. In American words like organize and appetizer, the British use an “S” rather than a “Z”, making them organise and appetiser. Words that end in -er in American English are often spelled -re in British English, like fiber vs. fibre. There are also many words in British English like jeweller that are spelled with two l’s, while in American they have only one.

One of the most commonly referenced differences in vocabulary comes with French fries, crisps, or chips. An American chip is a British crisp, while American French fries are British chips. The hood of an American car is the bonnet of a Brit’s car, while the trunk of the car is the boot. The football that Americans watch is specified in British English as “American football,” while British football is what Americans refer to as soccer. The American drugstore is the British chemist, and a clock in American English can be wound counter clockwise, but in British English it is wound anti-clockwise.

Even with a guide, it can still be difficult to navigate the similarities and differences between American English and British English, but eContent Pro International can help. Our English language copy editing services can support both American English and British English. Increase the quality and integrity of your work by using our services to prepare your manuscript for publication!