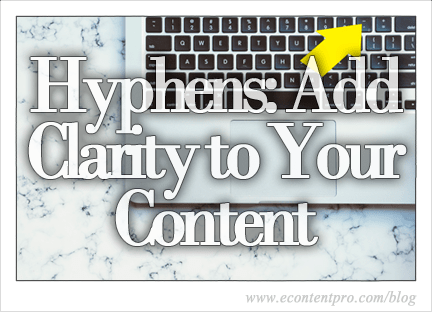 It’s easy to misuse different punctuation marks, such as the infamous semicolon, and being unaccustomed to the small details in the English language will make it even more confusing. If you’re uncertain about how to handle different situations in your text, it can become a nightmare attempting to proofread your content before it’s read by peers or superiors. Professional proofreaders will always be a tremendous help and can relieve your apprehensions. Yet, having some guidance on correct usages will make writing in the future less of a headache.

After working with documents submitted by authors and editors from around the world and with various backgrounds and experiences, we’ve observed that one piece of punctuation is being frequently misunderstood and seriously underused. The hyphen—tiny, but important—will add clarity and a more sophisticated flow to your writing if used properly. Our seasoned editors regularly see hyphens missing, and although there is some debate on a handful of uses, a long-standing consensus indicates that the hyphen has reasonable rules of usage in the American grammar system.

A compound modifier typically acts as an adjective. It’s a combination of two or more words that is used to describe or “modify” something. So, how do you know when to use these? First, consider the different kinds of compound words. We have closed compounds, which aren’t modifiers. These are words like “pillowcase,” “textbook,” and “snowman.”

Then, there are the controversial open compounds. Writers sometimes debate about whether some of these compounds should be hyphenated or not, but for the most part, these include words like “coffee pot,” “web page,” and “high school.”

With these compounds in mind that don’t require hyphens, let’s take a look at some hyphenated compounds being used to better illustrate how and when to insert a hyphen.

To explain a bit more, consider the first sentence given. “Cash-only” is used to describe the restaurant. One could say, “The restaurant takes cash only,” but when used as a direct adjective, the hyphenation is required to add clarity. Here’s an example of a sentence that would be left unclear to the reader were the compound modifier not hyphenated:

In the first sentence, it seems that the kitchen mixer may be “used,” small, and old, but with the correct hyphenation, you can see that the mixer is actually “little-used” or perhaps, almost brand new.

Still unsure? Some of these compound words aren’t written in stone, especially since hyphenation for compound nouns and verbs is so often inconsistently used. So, if you have trouble determining whether or not “video-game” should actually be “video game,” don’t over-worry yourself; even an English professor wouldn’t be able to tell you with absolute certainty. Although, what is crucial is the use of properly hyphenated compound modifiers.

Hyphens are often used to express the age of something or someone. It’s correct to use hyphens when writing out these compound numbers, which is simply any number that’s two words because of its intent. Be sure not to forget the second hyphen before “old.”

The five-year-old ate her birthday cake.
My six-month-old likes to munch on blueberries.

However, when the measurement is plural, drop the hyphen. This rule will apply every time:

His daughter is five years old.
My son is six months old.

The “teen” numbers are single words, so any number between twenty-one and ninety-nine should use hyphens. On the other hand, hundreds and thousands are not hyphenated. So, for instance, “four hundred and thirty-two” is the correct way of writing the figure out. Otherwise, be sure to remember the hyphen.

Lastly, we can’t forget about fractions. When written out, fractions must always include a hyphen because essentially—much like when describing one’s age—these are acting as compound modifiers.

It’s important to be aware that when considering the use of hyphenation, be careful when using adverbs, or more generally, words that end in -ly. A hyphen is never used between an -ly adverb and an adjective combination when describing a noun or pronoun. Take the following sentences:

She lives in a largely Mexican-American neighborhood.
He’s a highly motivated child when candy is involved.

Note that no hyphenation is used between the adverbs and the adjectives—“largely Mexican-American” and “highly motivated”—even though the word choices act as a unified modifier.

Perhaps one of its most critical uses, hyphens placed after prefixes or before suffixes can change the entire meaning of a word in cases where the reader may have no ability to tell the difference. First, the general rule of thumb with prefixes is that when they come before proper nouns or proper adjectives, when two of the same vowels are adjacent, or when using self-, ex-, and/or all-, hyphenation is needed. Here are a few examples:

Also, this may seem obvious, but if overlooked, it will be damaging to the meaning of your sentence; use a hyphen with the prefix re- or any other prefix when the word signifies something completely different without hyphenation or may confuse the reader. For instance, observe how the following sentences change in meaning or may be off-putting:

Similarly, suffixes are utilized to create new words or a variation of a word, such as “live” being changed to “lively” with the suffix -ly. Hyphenation is seldom used with these, but for increased clarity, we recommend for authors to hyphenate before suffixes if the adjacent letters are the same, or if -based, -style, -elect, or -free are used. See the following:

As another piece of guidance, be wary that you’re not using dashes, particularly em-dashes (—) interchangeably with hyphens. These are different punctuation marks; dashes have their own set of rules. Also, don’t add spaces on either side of a hyphen.

Whether you’re writing academically, for business, or for pleasure, using the aforementioned rules of hyphenation will ease your mind when trying to figure out when to use hyphens—and why. Soon, if you take hyphens seriously, you’ll probably notice misuses and missing placements in other texts. Embrace it, because becoming a hyphen-pro will enable you to avoid leaving your reader confused or mislead.