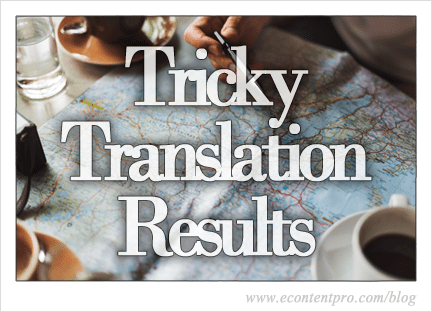 You can’t put lipstick on a pig, right? What’s that even mean? And how would we translate that to mean the same thing in another language? Imagine a Turkish native trying to wrap their head around the literal translation of, “I’m as happy as a clam.”

We call these idioms. Understanding sayings that come from another language, or attempting to make your funny phrasing fit into the consciousness of a foreign language, can cause frustration, miscommunications and complete misinterpretations.

There are a thousand examples of this sort of cultural confusion, and making sure your content can be easily translated and sent across borders is paramount to anyone in both academic and professional circles.

The challenge to idioms in language translation boils down to local interpretation or localization. Localization is the adaptation of international messaging for products or services to fit the consumption habits of a local culture. In localization, language not only affects the voice and tone of content, but its flow as well.

Localizing content might mean scrapping that widely-understood saying in English, because in Russian or Polish, it would be rendered completely useless—or frankly, ridiculous. Making sure that the message you want to send is getting interpreted and communicated properly to foreign audiences requires the skills of a culturally intelligent translator, because otherwise, your saying might make a non-English speaker quite bewildered, confused and uncomfortable.

An example of how this misinterpretation can occur is exemplified with an old Russian idiom. If you want to indicate that someone is doing something hastily, or haphazardly, in Russian, you’d say, “James is galloping across Europe.” This saying has a long-held understanding in Russian culture, due to several failed conquests of Russian military leaders to invade Europe. It would make absolutely no sense to anyone in San Francisco using standard Russian to English translation if you went around saying people are galloping across Europe.

In English, one might say, “James is off to the races,” or, “James is jumping the gun.” Both idioms would confuse anyone using standard English to Russian translations, probably because they are taking it literally, or just going off the superficial meaning rather than implied meaning. Obviously, the accepted English translation isn’t explaining that James enjoys hurdling gun barrels.

Effective Idiom translation and interpretation is a difficult task for any professional translator, and certainly an impossible one for machines.

While idioms can bring people together easier, explain the unexplainable, or maybe just confuse the young, we will continue to use them because they are culturally ingrained. And in using these phrases, they’ll continue to be translated and possibly misinterpreted. The key to all of this is finding a multilingual human who knows how to replace it, without stripping away the core message.

Visit our translation services page for more information about our academic and professional translation and effective interpretation options.