When to Use an Apostrophe 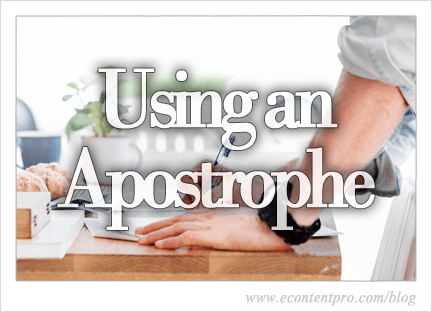 What Is an Apostrophe, and When Should It Be Used?

An apostrophe is a punctuation mark that serves a variety of purposes. We have taken a look at each of the uses for apostrophes below.

Use an Apostrophe to Show Possession

To show the possession of a singular noun, simply add an apostrophe + s.

To show the possession of nouns that end in s, follow the rules below.

Rule 1: If word is plural, attach an apostrophe.

In this example, we are talking about different carriers for multiple cats.

Rule 2: If word is singular, most sources recommend adding ‘s

In this example, we are discussing the project of one class. If we were talking about multiple classes, our sentence would read: the classes’ project.

To show the possessive form of regular nouns that become plural by adding s or es, you will need to add an apostrophe after the final s in the word.

To create the possessive form of irregular nouns that become plural by changing spelling, the rule for adding an apostrophe will vary. We recommend that you write out the entire irregular plural noun before adding any punctuation.

Example: the books of the children

In this example, the plural form of the word child does not have an s, so we will need to add an apostrophe + s to properly show that the children own the books.

Again, the plural form of moose is spelled the same, so we will need to add an apostrophe + s to show that the tracks came from the moose.

To show the possession of singular compound nouns, add an apostrophe + s at the end of the word.

Example: This is my sister-in-law’s car.

To show the possession of a plural compound noun, first you will need to create the plural version of the noun. You will then add an apostrophe + s to the end of the noun.

Example: We are going to my brothers-in-law’s house for the holidays.

To show the possessive plurals of proper names ending in s, such as Hastings and Jones.

If two people possess the same item, put the apostrophe + s after the second name only. However, if one of the joint owners is written as a pronoun, you will need to use the possessive form for both.

Incorrect: Laura and my home
Incorrect: Mine and Laura's home

Note: As our examples above demonstrate, when one of the co-owners is written as a pronoun, you will need to use possessive adjectives (my, your, her, our, their). You will want to avoid possessive pronouns (mine, yours, hers, ours, theirs) in such situations.

In cases of separate rather than joint possession, use the possessive form for both. You will want to ensure that you are using the plural form of the item that is possessed to show the separate possession.

Example: We will be visiting Steve’s and Sarah’s homes on our road trip.

Amounts of time or money are sometimes used as possessive adjectives that require apostrophes.

Beware of nouns ending in y. Do not show possession by changing the y to ies.

To show possession when a noun ending in y becomes plural, write ies'. Do not write y's.

Exception: Names and other proper nouns ending in y become plural simply by adding an s. They do not form their plurals with an apostrophe, or by changing the y to ies.

Use an Apostrophe to Show Contractions

You will need to use an apostrophe with contractions, or shortened forms of writing words. The apostrophe is placed where a letter or letters have been removed. Example: cannot -> can’t

Use an Apostrophe to Make Words Plural

There are various approaches to creating the plural form of many letters that appear on their own, as well as numerals. You can also use an apostrophe to create plural forms of some words. We have provided examples and further instruction on these items below.

Many style guides recommend placing an apostrophe after single letters for the sake of clarity.

Example: He received all A’s on his report card.
Example: Mind your p’s and q’s.

When you are writing groups of two or more capital letters, apostrophes are not as necessary to include.

Example: That child has learned his ABCs.

For clarity, apostrophes can be used with single digit numbers but are not necessary. We recommend using your judgement when determining whether you should include an apostrophe.

Both of these examples are correct.

When you are writing a double or triple digit number, as well as anything higher than triple digits, many style guides do not recommend the use of an apostrophe.

When you are forming a plural of a word that is not normally a noun, some style guides will recommend that you add an apostrophe for clarity.

Example: Here are some do's and don'ts.

Things to Keep in Mind When Using Apostrophes

In this example, the incorrect sentence does not make sense unless New Orleans is being used as an adjective to describe cuisine. In English, nouns frequently become adjectives. Adjectives rarely if ever take apostrophes.

In this example, United States is an adjective that modifies citizen and as such should not receive an apostrophe.

Apostrophes are a punctuation mark that can be used in a variety of ways. This also means that they have multiple rules that must be followed. If you are unsure of yourself when using apostrophes, let us help you. Our professionally trained copy editing team will review your document and ensure that you have used apostrophes correctly, as well as look at many other grammar problems. Learn more about our copy editing and proofreading services.