When to Use Awhile or A While 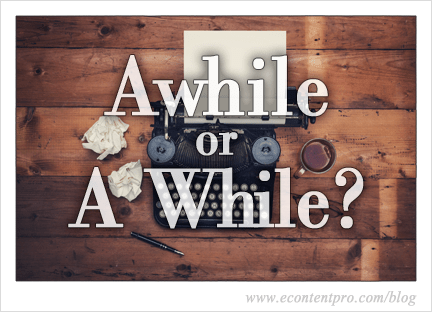 Many writers use awhile and a while as interchangeable words, since they are the same word: one without a space and one with a space. Although this is true, these words have two distinct uses. We will look at the definition and the definite use of each of these words in this blog post.

What Does "Awhile" Mean?

Written without a space, awhile means “for a time” and is an adverb. In sentences where using awhile is correct, you will be able to substitute another adverb, which is a word or phrase that modifies or qualifies an adjective, verb, or other adverb or a word group, expressing a relation of place, time, circumstance, manner, cause, degree, etc., in its place. We will look at some examples of this below.

In this example, the second sentence is still correct when we substitute the adverb quietly.

Once again, our second sentence makes sense once we have substituted the adverb “briefly” in its place, so we can tell that we have used the proper form of awhile.

What Does "A While" Mean?

A while, written with a space, describes a time and is used as a noun. This is shown by the article “a” coming before the noun of “while.” You can test that you have used this correctly by replacing a while with another “article + noun” combination. We will look at some samples of this below.

Our second sentence is still correct and still makes sense when we change our “article + noun” combination, so we can tell that we have used the correct version of a while.

Once again, we can see that our second sentence is still correct once we change our “article + noun” combination, so we are sure that we have used the correct version of a while.

We can see in our examples above that a while is typically more general, whereas our replacement phrase tends to provide a bit more detail, which is something that you should keep in mind when writing, as sometimes being more detailed is necessary for your writing situation.

Tricky Situations With "Awhile" And "A While"

The correct use of awhile and a while can get tricky in certain situations. This trickiness arises due to the fact that you can switch wording of your sentence around and need the opposite version of a while. Let’s look at our first example to see this in action.

More "Awhile" and "A While" Examples:

In the examples above, we took our sentence that correctly used awhile and added a preposition. Since a prepositional phrase needs to include a noun as the object of the phrase, we now need to use the noun form of a while, so we will need to include the space.

In this case, once we removed the prepositional phrase from our sentence, we needed to use the adverb form of awhile.

How to Be Sure You're Using "Awhile" And "A While" Correctly

You can be sure that you are using these words correctly by testing our substitution tricks. You can also remember that even though awhile and a while both describe a vague amount of time, you will need to use the one-word version, or the adverb, when it is not the subject or object of the sentence or phrase, and the two-word version, or the noun, when it is.

If you are unsure of yourself when it comes to which version of awhile to use, let eContent Pro help you. Our professionally trained editors will review your document and highlight any incorrect uses of awhile and a while in your document, along with a variety of other grammar issues. Learn more about our copy editing and proofreading services today.